Visiting the Guggenheim Museum in Manhattan, is definitely on your to-do list: now let’s just add a great gelato 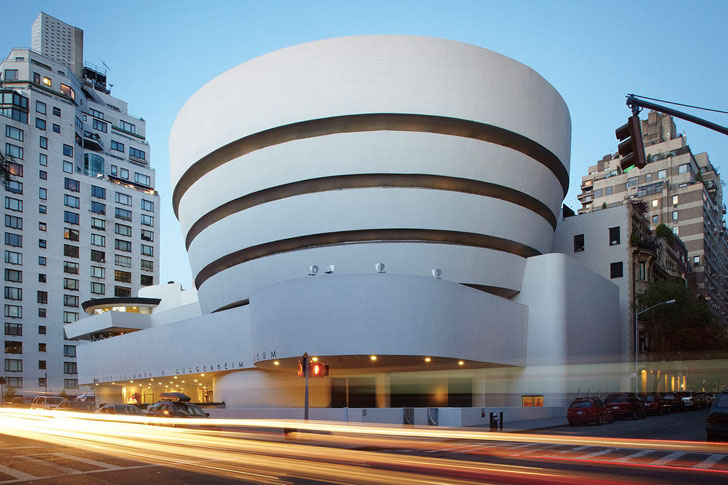 Here we come to a further highlight of New York museums and architectures scene: the iconic Guggenheim Museum at 1071 Fifth Avenue.  It is the permanent home of a collection of Impressionist, Post-Impressionist, early Modern, and contemporary art and it also features stunning temporary exhibitions throughout the year. Established in 1939 with the name of the Museum of Non-Objective Painting, it actually adopted its current name only in 1952, three years after the death of its founder Solomon R. Guggenheim. In 1959, the museum moved from rented space to its current building, a landmark work of 20th-century architecture designed by Frank Lloyd Wright. The iconic cylindrical building, wider at the top than at the bottom, as to provide an inverted natural expectation, was conceived as a “temple of the spirit”. Its unique ramp gallery extends up from ground level in a long, continuous spiral along the outer edges of the building to end just under the ceiling skylight. The building underwent extensive expansion and renovations in 1992 when an adjoining tower was built, and from 2005 to 2008. In 2013, a record year for the museum, nearly 1.2 million people visited it.

If you have already visited, you’ll remember visitor’s first intake while walking inside: a huge atrium, rising 92′ in height, is open to an expansive glass dome. An each side of the atrium is a continuous ramp uncoiling upwards six stories (more than one-quarter of a mile), impressively allowing for one floor to flow into another. The ramp also creates a procession in which a visitor experiences the art displayed along the walls as they climb upwards towards the sky. It is certainly an evocative path full of symbolism and emotional involvement.

Should you be worried about how to get your kids engaged in such a poignant experience, you can always promise a joyful gelato as the reward for their attention inside the museum. You’ll find our pinkful cart right at the main entrance, so make sure your kids have seen it before you step in.