We would eat it every day, and when it is not in our kitchen we do nothing but think about it. We are enchanted by the gelato display cases that show it. Dark, milk, white, according to taste. We are talking about chocolate, of course! But have you ever wondered how is born?

The history of chocolate begins 4,000 years ago in Mexico. This is where the first cocoa plants were found. The Olmec, one of the first civilizations of Latin America, was the first one to transform the cocoa plant into chocolate, on the purpose to use the drink as a medicine. Many centuries later, the Maya proclaimed chocolate the “Drink of the Gods“. It is said that, in the 15th century the Aztecs used cocoa beans as currency. Nobody knows for sure when chocolate reached Europe. 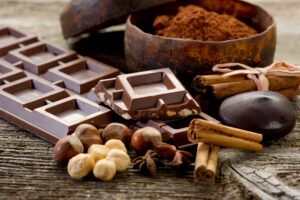 Chocolate remained immensely popular among the European aristocracy. Royals and upper classes consumed this delicacy mainly for its health benefits. But the chocolate was still prepeared by hand, with a slow and laborious process. With the Industrial Revolution around the corner, things were about to change. In 1828, the invention of the press revolutionized the production of chocolate. This innovative device could help release cocoa butter from roasted cocoa beans, producing a fine cocoa powder. The powder was then mixed with liquids and poured into a mold where, once solidified, it became an edible bar. And just like that, the modern era of chocolate was born. 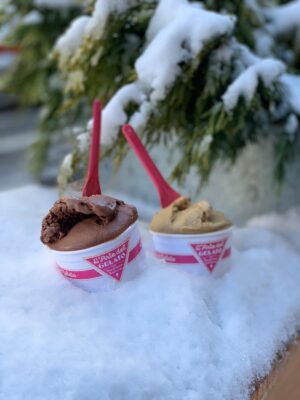 From Cioccolato to Gelato

According to the International Ice Cream Association, 30% of people prefer chocolate gelato. But what is the first flavor that gelato has featured?

Some of the early frozen desserts consisted of shaved ice with flavored sugar syrups, a kind of present-day granita. In the Middle East they were known as sharbati or Serbs: the origin of the words sherbet and Sorbetto.

For the reason above, some of the oldest flavors of gelato were actually drinks, such as coffee and tea. That’s why chocolate gelato was invented long before vanilla. The first frozen chocolate recipe was published in Naples in 1692 in the book The Modern Steward. Chocolate was a popular hot drink in 17th century Europe and was commonly mixed with spices such as cinnamon, chilli, anise, almonds or musks (glandular extracts from musk deer). Today’s “Mexican chocolate” is actually a descendant of how chocolate was served at the Spanish court, not of how it was conceived by the ancient peoples of Mexico. 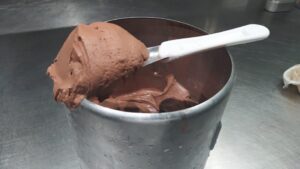 No doubt chocolate has revolutionized the world of ice cream which, until before meeting the food of the Gods, had known only the flavor of vanilla. Chocolate flavored ice cream represents an important revolution precisely because of its complex processing and its many variants. As we have learned from its history, chocolate has always been considered a precious good, a real wealth! If the Maya treasured it and the Spanish royals hid it greedily, nowadays we certainly cannot just consider it as any other “flavor”.

Therefore, that of chocolate gelato can be considered a real art, which not everyone has. As the great master chocolatiers teach us, you have to handle it with care, know how to work it wisely and combine it with care. The taste of chocolate always knows how to touch the deepest strings of one’s soul, so you have to find the right way to enhance it along with other combinations that could prove successful.